When a material is subjected to x-ray bombardment, some of its electrons will gain energy and leave the atom, creating a void in the vacated shell, thereby releasing a photon of x-ray energy known as x-ray fluorescence.

The energy level or wavelength of fluorescent x-rays is proportional to the atomic number of the atom and is characteristic for a particular material. The quantity of energy released will be dependent upon the thickness of the material being measured.

Basically, the x-ray fluorescence unit consists of an x-ray tube and a proportional counter. Emitted photons ionize the gas in the counter tube proportional to their energy, permitting spectrum analysis for determination of the material and thickness.

X-ray fluorescence is the most precise measurement method, especially for small-diameter parts, or dual coatings such as gold and nickel over copper. 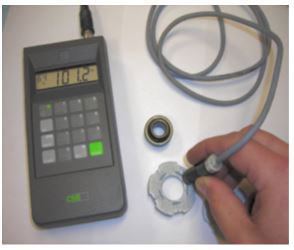 The eddy-current technique is a non-destructive method of determining coating thickness used for measuring both non-magnetic, metallic coatings over steel and non-conductive coatings over non-ferrous metals.

When a conductive material is subjected to an AC magnetic field from a probe, eddy-currents occur in the material in proportion to the frequency and resistivity. The induced eddy currents generate an opposing magnetic field which alters the circuit reactance and the output voltage of the probe. The change in output voltage is used to calculate the coating thickness. Electrical conductivity between the coating and substrate should differ by a ratio of 2:1 for optimum accuracy.

Non-conductive coatings introduce a gap (lift-off) between the probe and non-ferrous base material. This gap produces a loss in eddy current penetration which is compared to a measurement directly on the base material to determine coating thickness.

UNIMETAL ON THE ROAD

Check out photos from past events and find out where we’ll be next!